Share on FacebookShare on TwitterShare on Google+Share on Linkedin

Speaker, performer, author Bo Eason started his career in the NFL as a top pick for the Houston Oilers. Continuing on with the San Francisco 49ers, during his 5-year career Bo competed beside and against some of the greatest players of his generation.

In 2001, Bo wrote and performed his one-man play, Runt of the Litter, which he performed on Broadway to rave reviews. The New York Times called it, “One of the most powerful plays in the last decade.” Bo toured with the play in over 50 cities. In his quest for excellence on the stage, Bo trained with some of the world’s most brilliant performance and movement coaches, Larry Moss and Jean-Louis Rodrigue.

Now in his third act, he speaks to and trains some of the most successful people in the world—athletes, artists, entrepreneurs, C-suite execs—on how to communicate for maximum impact and success. He has consulted for clients like Advisors Excel, Morgan Stanley, Dimensional Fund Advisors, Mass Mutual, Guardian, and Merrill Lynch.

His training programs on leveraging the power of personal story have transformed the way speakers communicate. Your story is unique from any other. Bo will show you how to leverage your achievements and your failures in a way that captivates and connects you with your audience every time.

His book, There’s No Plan B for Your A-Game, will be released September 2019 by St. Martin’s Press. 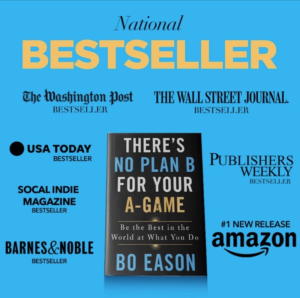 What you’ll learn from this episode: